What is the Strangler Application pattern? 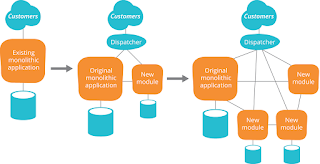 In a 2004 article on his website, Martin Fowler defined the Strangler Application pattern as a way of handling the release of refactored code in a large web application.

The Strangler Application is based on an analogy to a vine that strangles a tree that it’s wrapped around. The idea is that you use the structure of a web application—the fact that web apps are built out of individual URIs that map functionally to different aspects of a business domain—to divide an application into different functional domains, and replace those domains with a new microservices-based implementation one domain at a time. This creates two separate applications that live side by side in the same URI space. Over time, the newly refactored application “strangles” or replaces the original application until finally you can shut off the monolithic application. Thus, the Strangler Application steps are transform,coexist, and eliminate:
The great thing about applying this pattern is that it creates incremental value in a much faster timeframe than if you tried a “big bang” migration in which you update all the code of your application before you release any of the new functionality. It also gives you an incremental approach for adopting microservices—one where, if you find that the approach doesn’t work in your environment, you have a simple way to change direction if needed.

How to Make Easy money